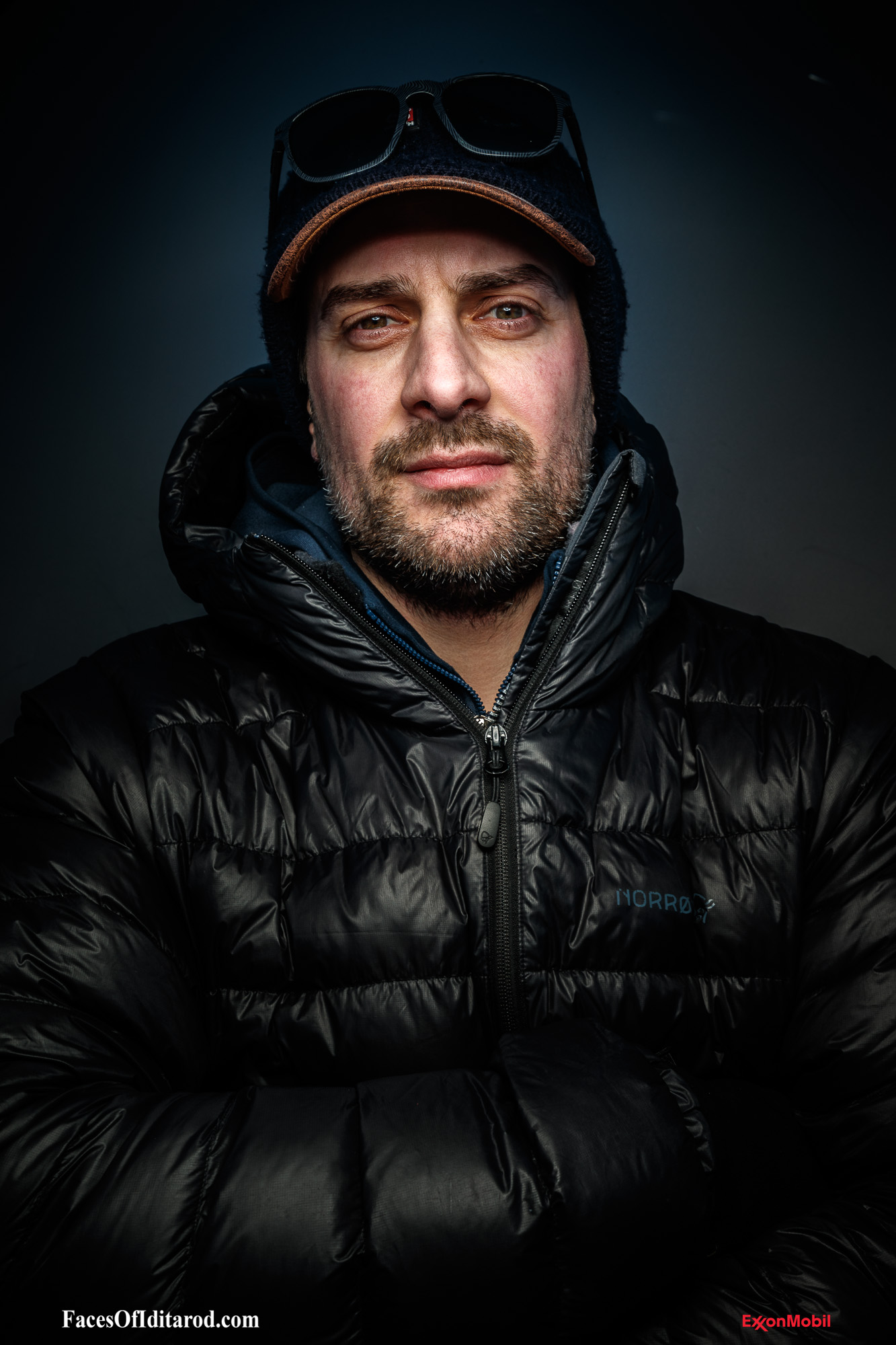 Years involved with Iditarod: This will be my 6th year.

Iditarod Role: Race judge and I’m also the IOFC representative to the board of directors. And he was also the MC, Masters of Ceremonies at the restart in Willow.

I got involved with Iditarod as a rookie in 2007, which happened to be one of the most difficult Iditarods in history because there was very little snow for a lot of the trail, even parts that normally have good snow. And it was below zero, basically, the entire time from when we left Willow Lake to him we got to Nome. It was a brutal year with 28 scratches and I managed to finish. I wasn’t sure I was going to but I did. Then I took a few years off because I wasn’t mushing dogs. And then living in Anchorage after that I started bugging Mark Nordman about getting involved with the race organization in some capacity. And in 2015 I got my first gig as a race judge, actually right here in Rainy Pass. And they also made me the MC of the restart when their long-time MC retired. And then lastly, a couple of years ago, I ran for the IOFC representative seat on the board of directors and was appointed to that role by my fellow mushers.

I am here today and involved with Iditarod because I grew up with sled dogs and sled dog racing and I think it’s about the coolest event. This race and other dog races are the coolest events in the world. When I stopped running dogs I decided that I had to be involved in the sport in some way. And I’m trying to involve myself with the Iditarod any way possible. That’s why I do all these different sorts of things. And I’m still involved in other races – like the Kusko 300 out in Bethel – but this is the biggest race in the world. I know a lot of these mushers. I know a lot of the people on the trail, and one thing I look forward to every year is coming out here and seeing all these people.

One of my most memorable Iditarod experiences was in 2007 when I ran this race and it started right here on Puntilla Lake. We pulled in here and it was cold and windy and it was cold enough and windy enough that a lot of people… We pulled in about this time of day in the evening and a lot of people spent the whole night here because of the conditions. And in the morning it was 30 below and blowing 30 and we headed out on the plateau, group of teams, out of Puntilla Lake here, and eight teams turned around and came back onto the lake that morning. And I was one of them and I wasn’t sure I was going to get out of here. And then later that night… So after being here over 24 hours officially, we finally made it up and over the pass and into Rohn. And it took us eight or nine hours and it’s usually about a four to five hour run. And it was brutal and there was so little snow that year that in that strong 40-, 50- mile-per-hour wind up on the pass. It was blowing grit and dust and rocks and a little bit of snow mixed in. And I remember thinking “there’s no reason anyone in the world would ever want to do something like this.” But then, what was so memorable was the last two miles coming into Rohn, we got off of the Post River into the trees, and it was a nice snowy trail into Rohn. I was like, “That’s the whole point. You get through the hard part and then there’s a just little bit of nice trail that makes you think, you know what? Mushing’s not so bad, I’m going to do this again sometime.”

What I know for sure in life is two things. People got to get outside and people have to interact with their friends and neighbors and people that like similar activities. The Iditarod is a good example of both of those things. You get out here, you share the experience with people, you share participation in a sport and an activity that you love and that the people around you love. That’s the whole point of life.