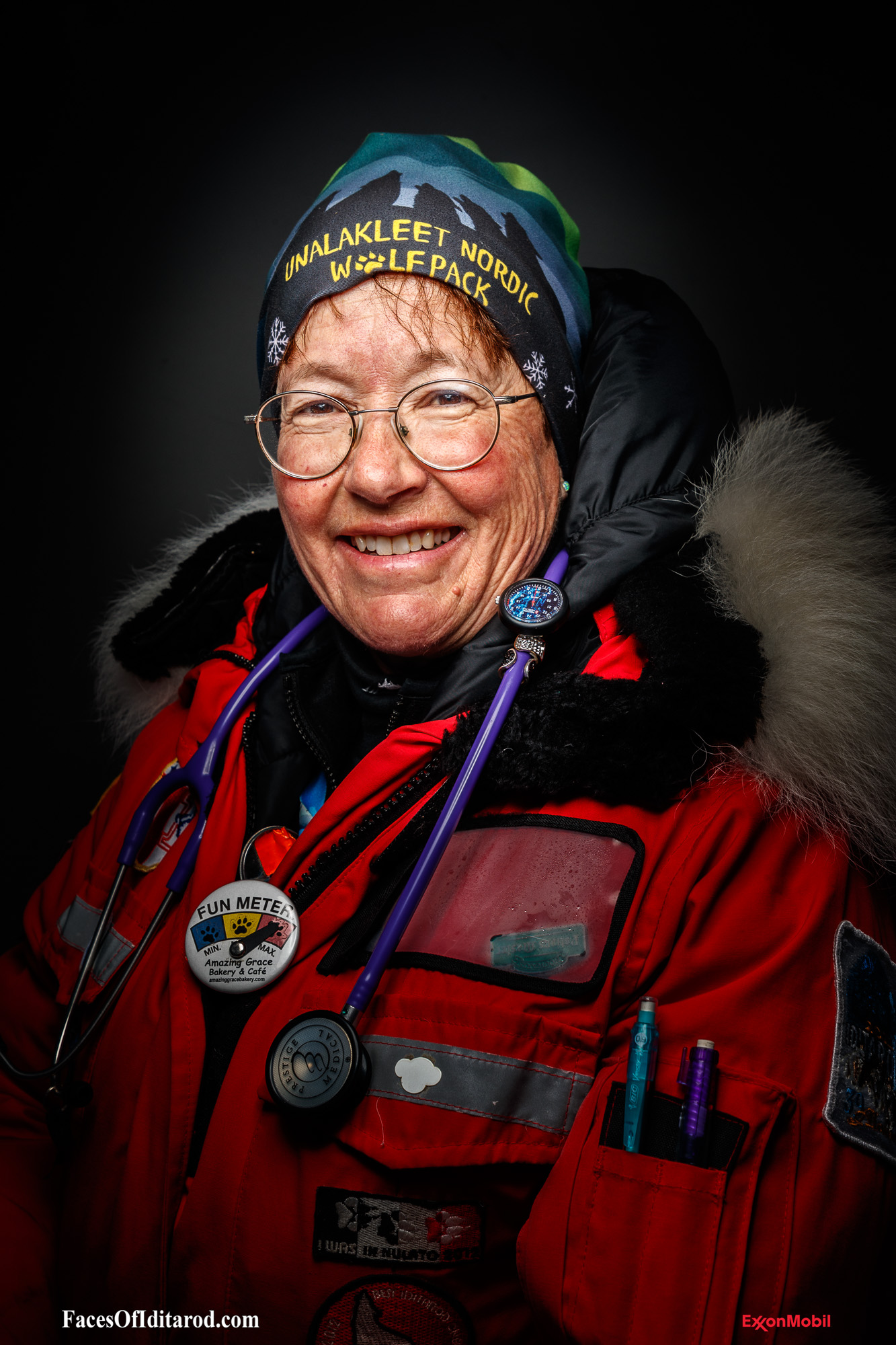 I got involved with the Iditarod when I was at an American Veterinary Medical Association meeting back in 2015. And Dee Dee Jonrowe was a guest speaker for some pharmaceutical company “Evening in the Museum” And I was listening to her stories about talking about doing the Iditarod shortly after having had her chemo and everything. And I was thinking, I do a lot of working dogs, but I did not know that dogs could do the things that she was saying. And I thought that sounded like a lot of fun, and I had been working local races, and everybody kept saying, “Oh, you guys ought to do the Iditarod. You ought to do the Iditarod.” And so finally, we decided to do it as a bucket list item. Applied, Stu accepted us. And we were only going to come up and do it once. And this is year nine, so there you go.

I’m here today and involved with the Iditarod, because it is plain and simply amazing. It is really hard to describe it. As I said before, I came up to do it just once, and then I keep coming back. And people ask me that, and I’m like, “I’m not sure why I find freezing, working in minus 25 degrees, freezing my hands, eating Iditarod orange diet, sleeping on the floor when I do sleep and not having sleep fun.” But evidently I do. And I think the reason why is, because the people here are absolutely amazing. Because it’s such an intense experience, you make friends with colleagues and other volunteers that last a long time. They’re almost like they’re heart friends, because you guys have such a uniquely-shared experience. And that’s why I keep coming back, is because of the wonderful dogs. The dogs are amazing. The mushers, many of the mushers have become really good friends. Most of the veterinarians I stay in contact with rest of the year. And some of the villagers too have become friends as well. It’s just a really unique experience that it’s just really hard to describe.

One of my most memorable Iditarod experiences was when a musher went out of his way to say thank you to the veterinarians and specifically to me. Two years ago in 2018, I was the Senior Checkpoint Vet at Anvik. And the first musher to the Yukon, they get the First Musher to the Yukon Award, which is a five-course dinner. The first musher was Nick Petit, and I was helping him with his dog, with all the cameras and everything around him. And they said, “Whose going to be your date, Nick? Who are you going to ask?” And normally the mushers will ask one of the volunteers or will ask one of the Tribal Elders in the village that we’re in. And Nick turned to me and he said, “What do you think? Want to be my date?” And I turned around and look behind me, because I didn’t think he was talking to me. And he goes, “No, you stupid!” And I’m like, “Oh, okay. I guess that’s me.” So, I had a five-course meal at nine o’clock in the morning that involved shrimp and prosciutto and buffalo medallions and spinach. And it’s definitely not the typical diet we get out on the Iditarod. We had Dom Perignon, and we came up with a new drink that we call… We even have a photograph of it, that’s called the Alaska Mimosa. And it’s pouring Dom Perignon into a little plastic bottle of Minute Maid Orange Juice.

What do I know for sure in life is that I will always have animal and human friends.