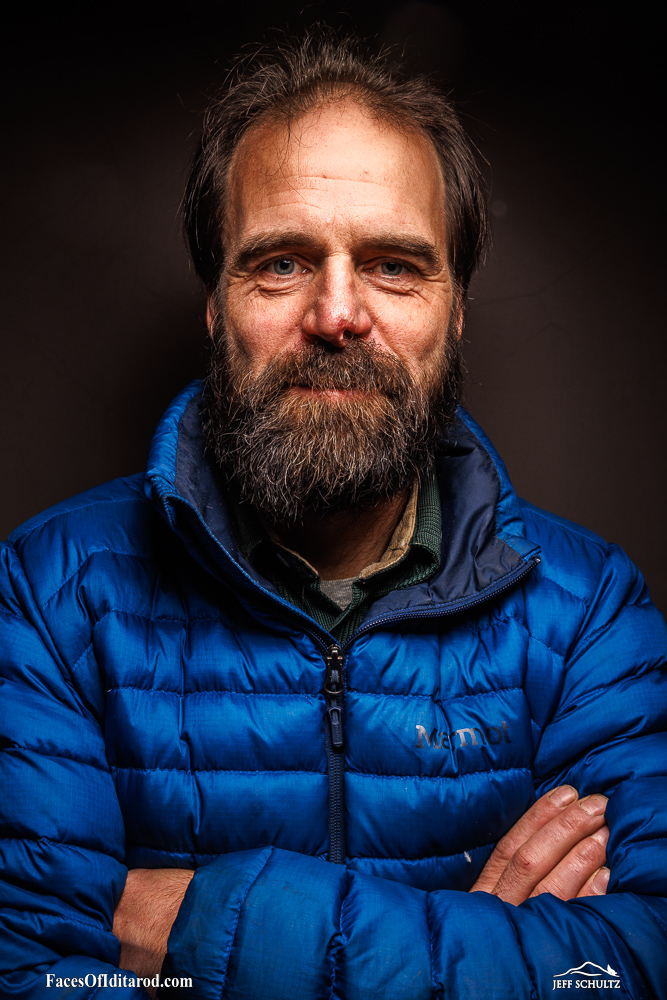 Years involved with the Iditarod: 46

I got involved with Iditarod, I guess the first time, when my dad was… Bud Smyth was fourth. And he came into Nome, and he flew my family up. My mom, Kathleen Harms, was pregnant with me. And they had a party out there on the ice, crab fishing. And yeah, my brother was pulling. My older brother was a year and a half old, pulling crabs up through the ice. And my mom was just about to pop, and I guess that’s how far the story goes back.

I’ve been involved with Iditarod because it was a family tradition, and we started with Iditarod when I was just a tiny kid. My dad was doing it, and it was all-consuming for the whole family. And I love the dogs, so I stayed doing it, and it’s just been a lifetime thing for me. The Iditarod, aside from the dogs, the dogs being the thing that really drove me toward participating in the sport.

One of my most memorable Iditarod experiences has to do with my best leader of all times and how close we got over the years. And I left Shaktoolik on a relatively calm, clear-ish night. It was blowing pretty good, and it had been blowing really hard for a long time, and the sea ice was just swept completely clean. So once we hit the sea ice going to Koyuk, there were no markers, period. But there were some scratches where the trail had been from brakes. And so, you could see the trail, sort of.
And we were just cruising along and I had Louie, my best leader that I ever had up there, and we had a very close connection, but I fell asleep. And I think possibly he fell asleep while running or just zoned out. And we left the trail. And he made almost a right hand turn at some point after we left the trail, and because he realized we were off of it, I guess. And the sled swerved, and I woke up and I realized I had no clue where we were. I didn’t know which side of the trail we left on, but he was a smart dog. And I knew that probably he knew. So I was just like, “All right, go back to the trail.” And he went back to the trail.
And then I had to try to second guess which way he wanted to go, because I didn’t know if we’d left on the right or on the left. And as he hit the trail, he started to turn, and I had to think about which way would Louie go when we hit a trail that we’d left. Would he head back to where we’d come from, or would he head toward where we were supposed to be going? And I had to go through that in my mind, and I knew him well enough that I knew that he would continue to go out away from the start, so we went on. And that was a cool experience because I knew that… I knew.

What I know for sure in life is that family and the people that are in your life are the most important thing.