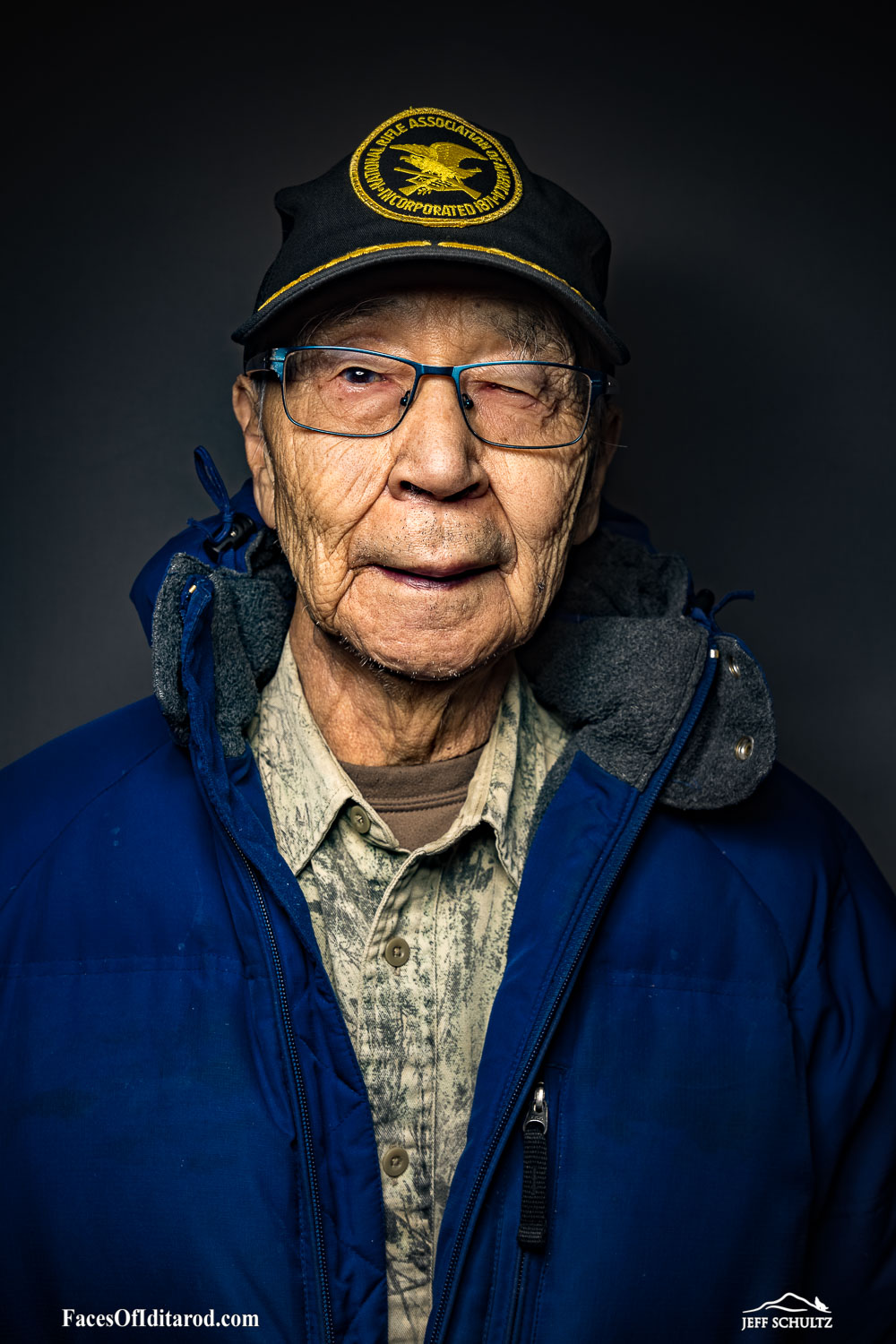 Occupation: Retired from the state, was a foreman for a little over 20 years.

Years involved with the Iditarod: Involved in Iditarod, those two years (1980 and 1981) but was dog mushing way before that.

I placed 19th in 1980, and I scratched in 1981 at Shaktoolik. I finished with 9 dogs out of 14. Like Herbie and all them dog mushers since I was young. That was life. But when I did Iditarod, when racing began, my wife, Janet, and I went to that and donated a hundred dollars each. And Oval Lake was there and I told Oval Lake, “I am going to run that race some day.” Which I did in 1980.

So why did you decide to run the Iditarod?

I had a very good team, but unfortunately, I could have been up further. But that’s how it is in the race. Anything can happen. I knew that, but my intention was to see the trail from Anchor to Nome. I really enjoyed that time, Herbie and I were the first to enroll in 1980, the two of us. And the first to enter Skwentna. I was 15 minutes ahead of Herbie, but Herbie made noise … knew then I couldn’t then before you wouldn’t make …

When I got to run Farewell lake, that’s where I dropped my first dog. Something happened to that dog, the tail, it couldn’t run. I had to carry her into Finger lake for about eight miles, left her there. So that, left me was 13 going to Rohn then I dropped one at Rohn. My wheel dog sprained the ankle and the ankle was really swollen, so I dropped her there. And that left me 10 dogs going to Farewell after stopping at, I think Rohn with Herbie. He left before me, but after he left, I left about two hours after Herbie from Rohn, but I lost trail for a while. And then got on that trail over to Farewell on the hill, on the top. And I kept losing the trail. So I would stop the dogs and look for, no markers that time, then I went out and then when I stopped the first time, the dogs were very still. It was at night. And then went a little further, I couldn’t make track again so I walked out and all that time, all I had on me was my knife and when I got back, dogs were very still again. Looking toward the house. And when the third time I stopped, I saw two eyes and a wolf. That’s what, that’s what they were aware of. And it was a good thing. I didn’t go too far from my team. And they were really just still, And when I got out they wouldn’t… It wouldn’t… The wolf wouldn’t go away from the trail. It wouldn’t go out. I took my handgun out and shot over it and it didn’t move. So I, lowered my aim and scared it off into the trees. Yeah. From there, before I get to the river crossing east of Farewell, I decide to stop. And that’s when Terry Adkins and Joe May passed me. And then I lost trail when I got to the river crossing, couldn’t make out on clear ice any sled tracks. So I left my dogs and then tried to find a trail where the crossing was. Well, when I got back, dog got up just before I got to them, dogs got up and took off and it was like good thing they got back on it, outside the river, really sticking out. That’s where they ran off into the willows that got the team. Otherwise, I don’t know how long I would’ve gone before I find them, but that was the only time they ever done that. They’ve never done it before. Then I found a trail to get back, then headed to Farewell. I got into Farewell in, let’s see one, two, six, sixth position. In that time, I took my 24 there and the trail wasn’t very well marked that time. And then after I took my 24 at Farewell, I left with Rick Swenson, Susan Butcher, Joe Redington, and Jerry Austin ahead of me and I, and I got… I got to them and stopped away from them and built a small bonfire to cook dog feed and then there was Warner behind me. And after I was traveled there about three hours, I thought the trail was good. I left and then I couldn’t find a trail, so I came back to the other teams, which was about maybe like six or seven miles in Nome, and then we all left and looked for the trail and Jerry Austin was the one that found out one marker on the wheelers and from there, the trail was okay. And Herbie, Herbie and Gomez were up, that’s a year Gomez won. I got into Nikolai about, I think about ninth or tenth place. And really good.

I know for sure in life, I’m almost 90 now… Is to keep yourself busy and which I have been doing. I’m a state retiree from the state and also from TO2 union. So I have pension from those two and of course the social security. And I phased out my dogs after 1981. I sold some, but I gave some away too. I wasn’t up to using the dogs much anymore since I was working. I did hold on a couple dogs. My last breed of dogs was adopted by someone in Colorado.