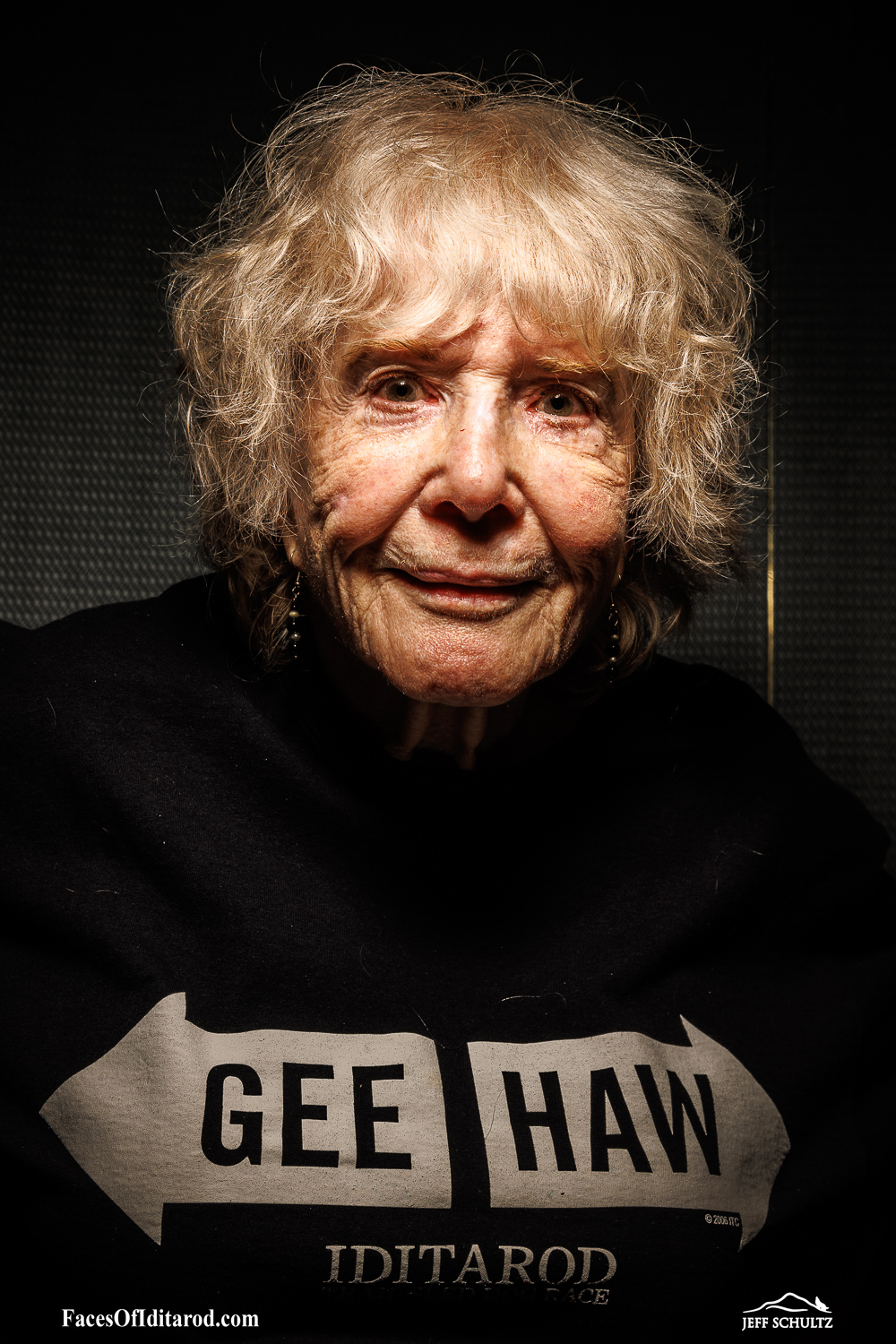 Years involved with the Iditarod: 22

My first trip to Alaska was in 2000, and it was a summer trip, and the girl I was visiting, who I knew from France, said, “You ought to come in the winter and see the Iditarod.” I’d always seen it on television, but the thought of seeing it in person, so I came the following year, and I became an Iditarod-a-Rider. I didn’t know what that was until I got there, and I was only up there about four or five days, and I saw all these people doing all kinds of different things, and I inquired and they said, “Oh, those are the volunteers,” and I thought, huh, I wanna be a volunteer. So, the next year, I came back up again, and I was Lance Mackey’s first Idita-rider, and I volunteered, and they said, “How would you like to work the night shift at Nome?” Well, I didn’t know what that meant, but sounded good to me.
So, I did. I worked the night shift at Nome, but I did fly to McGrath to check on Lance ’cause he wasn’t feeling so good. He had just had the cancer of the cheek, so I checked in on him and then went on to Nome. I did the night shift, which was a lot of fun. I had to sleep during the day and stay up all night, wake up the checker, ring the town, whistle to wake the people up, make sure that this was happening and that was happening. When they got near to town, I had a list of things that I had to do. It was very exciting. The first night was sheer hell because I hadn’t slept, but once I go, got into the- the rhythm of it, I would go and have breakfast and then sleep all day, and then report for duty in the nighttime.

I keep coming back to the Iditarod because I keep discovering more things about it. I’ve made friends. I’ve visited kennels. I’ve hosted some people in my house in California. It keeps me in touch with Alaska, which now I consider really my second home though I’ve traveled widely. My life has been an adventure. I’ve been in 160 countries, but I’ve been 22 times to Alaska. This is my 23rd, and I’m not over yet. I’m not done yet. There’s still someplace else to go. I haven’t been to Rainy Pass. I managed to get to McGrath. I got to Grayling. I’ve been in Nome, but yet it beckons me. The people beckon me. The dogs beckon me. It is envelops me with a kind of magic and wonder, and it’s hard to imagine a life without the Iditarod.

My most favorite Iditarod memory was, many years ago, I flew to Unalakleet and it was cold, there was ice, there was snow, and the place I was staying was a good 10 block walk to headquarters, but I set out and I’m walking along the main drag slowly, and a truck comes along on the other side of the street. And he sees me, and he does a u-turn, and he stops in front of me, and he says, “You must be not from here. Can I give you a lift?”  And I said, “Well, that was kind of you.” He literally turned his truck around. And he took me to the Iditarod headquarters, where the mayor of the town, who had been a former Iditarod musher himself, made some sausages in front of me and offered me some. Then I said to one of the ladies, “I’d love to get a t-shirt from Unalakleet.” And she said, “Oh, that’s the general store that used to be the checkpoint, and we moved the checkpoint. Never mind. I’ll get Joe.”  And she calls Joe, and Joe has a truck, and she says, “Would you take June down to the general store so she can get a t-shirt?” And he drives me back to the other part of town. And I walk- ’cause this is in the middle of winter. Snow, ice everywhere. And the woman says, “yes, what can I help? What do you like?” I said, “you wouldn’t by any chance have a Unalakleet t-shirt, would you?” “Oh, yeah.” So she gets this 20 foot ladder and gets somebody to climb up to about the fourth shelf on the top. And he drops down a box in front of her.  And I opened it. And it had a Unalakleet t-shirt. And I wear it sometimes in Southern California, and people look at it. They go, “Where is that?”

What I know for sure in life, is that whatever I’ve done, wherever I’ve been, whatever I’ve accomplished or not accomplished, that there’s still something else. There’s still somewhere in the world I haven’t been. There’s still people I haven’t met.   It’s a great adventure, life, and I think I’ve been as open to it as anybody in the world. Working my way around the world, no money. Traveling as a woman, alone in Asia. Never really had any problems. I’ve been broke, but had a good time. A wonderful time. And you know what? It’s not over yet, even though I’m 92. Here I am, on this cruise. And who knows what next year will bring?