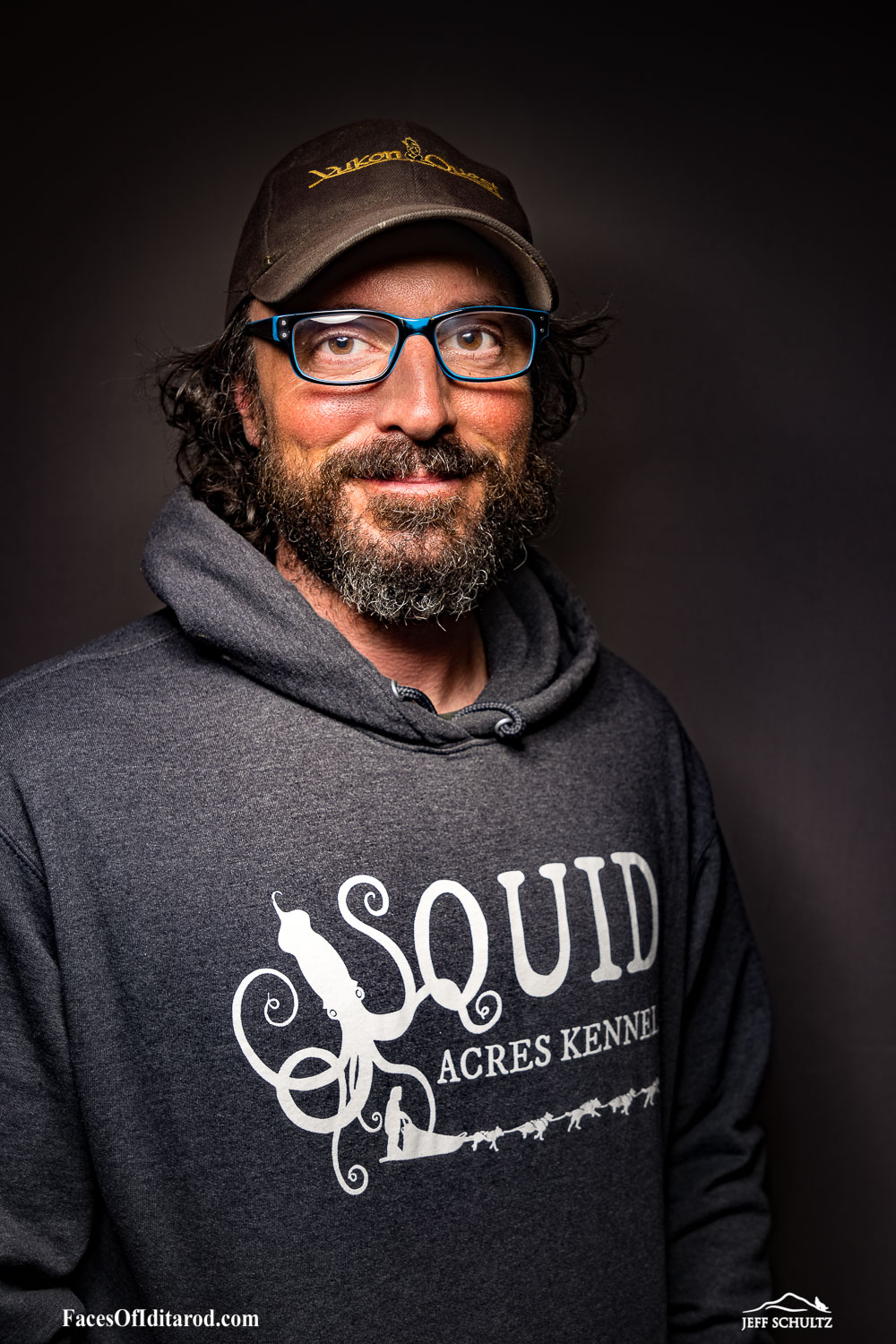 Residence: On the Denali Highway outside of Cantwell, Alaska.

Occupation:  Dog musher, guide, sled builder, and, I guess, carpenter. We own a remote lodge that we’re building, and I build dog sleds for other people, and I guide adventure trips.

Years involved with the Iditarod: Since about 2005, I believe was the first year that we actually went out to Finger Lake .

Iditarod Role: Checkers, volunteers on the race. Actually, I think it was 2007 that we were checkers. It’s also the year that we got sled dogs and got into mushing, and by 2013 was our first actual team in the race that Paige ran. The next few years, ever since then, we’ve had at least one team in the race and sometimes two teams.

I got involved with Iditarod back in about 2007. Why did we get involved? We were checkers at the Finger Lake checkpoint. We were starting our own dog team. My wife, Paige Drobny and I were starting our own dog team, and we thought it’d be fun to go with some friends out to Finger Lake and be checkers. So we learned a lot about, Iditarod. It was nothing we thought we would ever do, it was not ever a dream of ours to be Iditarod mushers, it was never a bucket list thing. We just had sled dogs, and it just was kind of natural progression. As we started doing more and more exhibitions and trips, friends said, “Hey, you should try racing.” We did some mid-distance races. We slowly did a few of those for several years and got qualified. Then 2013, it was Paige’s first race and, soon after, I did it as well. I can’t remember how many times we both ran it, but between the two of us, we have about 22,000-mile races with Yukon Quest and Iditarod races. That’s all happened since about 2012.

I’m here today and involved with Iditarod because my wife Paige Drobny is running this year. We actually both ran last year. This year, just her is running, so I’m here in Nome supporting her, as kind of the team handler, making sure all the dogs are taken care of, making sure she’s taken care of if she gets here. She’s really tired. She needs some extra help to getting herself to bed and fed and seeing with the dogs. So I’m here to be that person, make sure everybody is taken care of and gets what they need after working really hard for a thousand miles.

One of my most memorable Iditarod experiences was in 2000, I’m not sure. A few years ago, I ran Iditarod and, at some point, I ended up kind of joining forces with Martin Buser and Ketil Reitan, and I remember going through a big windstorm outside of Golovin. Martin was worried about the wind. He’s been doing this for a very long time, as we all know, and the forecast were really bad for wind on Golovin Bay, leaving Elim, and so we decided to stick together and travel through there together. When we got to Golovin, the wind was probably, I mean, I’ve never seen wind like that. I live in a really windy area, but tree lining the mountains, and I’d never seen wind like that. It sounded like a freight train around us when we got in it, and somehow the dogs just blew on through the storm like it was no big deal. I remember almost getting blown off of the sled, like gripping it really hard and hiding behind the sled. Luckily it was a headwind, not a side wind, and so it didn’t pitch us or tip us over. But we just kind of barreled through this windstorm as we went through Golovin, across Golovin Bay on the White Mountain. It was one of the most scariest, but also one of the most amazing experiences to see those dogs find that trail, work through it. It didn’t seem to faze them at all. It actually felt like it sped them up, and it was one of those really amazing experiences where you see how all that training and all that work really pays off to see those dogs excel. So that’s one of my most memorable experiences on the Iditarod Trail.